Spring training is underway, the beginning of another (let us hope) magical baseball season.  The boys of summer are gathering once again to ply their athletic gifts, and to amaze us with their exploits on the diamond.

And every spring, their gathering reminds me those happy days, just a couple of years ago, when the annual softball season opened in our Florida retirement community. A mob of elderly, erstwhile ballplayers would converge on the local park for the opening games of the season.

Most of us had spent a good part of our lives playing ball, while others, newly retired, had taken it up only recently. But we all shared the same enthusiasm for the game.

We enjoyed swinging the bat with wistfully-remembered power in the on-deck circle, we loved the anticipation of waiting in the batter’s box, and we cherished the elusive base hits we sometimes might stroke. There was always an exhilarating feeling of freedom in running ‘round the bases at top speed, or in chasing full-tilt after a long fly ball in the outfield—the wind rushing in our ears, visions of grace and glory forming in our mind’s eye.  At such moments, nothing else mattered in the world but the game. 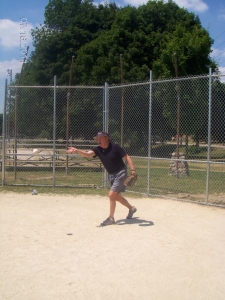 The game was the thing. We wished it could last forever.

But it couldn’t, of course. Even then, most of us could see the end approaching—still hazy on the far horizon, perhaps, but in sight, nonetheless.

The signs were small, but the start of each season brought more of them. The bats seemed heavier, the balls smaller, the bases farther apart. There appeared to be more holes in the infield for opponents’ ground balls to skip through. The throws in from the outfield lacked some of the crispness that was seen in other years.

In fact, I discovered I’d become a centre-fielder with a second baseman’s arm!

The most significant sign of all was the constant aching in our legs, our arms, our backs—lasting just a little longer than it ever used to. We feared for the day when it would linger all the way into next week’s game.

I guess that’s why we switched to a tamer version of the game, limited to those sixty years of age or older. Gone were the young, aggressive Turks who had overtaken us on the base paths. Gone, too, were the strong-armed pitchers who had overpowered us in the batter’s box.

And gone with them, unlamented, was the notion that winning was the only satisfactory outcome.

Our game had morphed into slo-pitch. The ball would float in from the mound to the waiting batter, crouching, bat-cocked, in gleeful eagerness. When he hit it, more often than not it was to one of the waiting fielders, of whom there were ten (in deference to our declining ability to cover the whole field).

Many of the old softball rules were changed, or at least modified for our game. For example, a team’s turn at bat still ended when three players were tagged ‘Out!’, but no team could go through its batting lineup more than once, even if everyone batted safely.

The best part, though, was that no one seemed to worry too much about winning. At the end of every game, the players would file past each other across the middle of the infield, laughing, shaking hands, and complimenting each other on a game well-played. When asked later (perhaps after a brew or two) about the outcome of the game, we often had trouble remembering the final score.

Most of us always loved playing ball, and we were awfully glad there was still a game for us to play. Because playing, far more than winning or losing, was the elusive reward for our efforts.

After all, it’s not who wins the game that counts—it’s who shows up to play!