Grammatically incorrect ‘though it may be, that sentence succinctly describes the prime duty of every responsible journalist.  Consumers of our many print and digital mainstream media (MSM) outlets have the right to expect balanced, accurate reporting from them.  How else will we citizens learn about events transpiring in the world around us?

There are currently several threats confronting trustworthy journalism, however.  The first centres on how we are to define the words responsible, balanced, and accurate.  Each of us may have our own definition, but ours might well differ from someone else’s.  Who is to say whose version is correct?  In an environment where media entities range from the far-right of the political spectrum (eg. Breitbart or Sean Hannity) to the far-left (eg. New Yorker or Slate), woe betide the consumer who does not comprehend the disparity in the balance and accuracy of their reporting.  Each of them defends their coverage of the news as responsible, balanced, and accurate, so it falls to us to ensure we are knowledgeable of their respective stances.

Almost every media outlet has its own bias; the responsible ones make their position clear to their followers, who can then interpret what they’re receiving through that filter—thus becoming informed citizens.  But those outlets that mask their editorial stances encourage a rising mistrust of all MSM among the citizenry, who, as a consequence, begin to paint every one of them with the same brush.

Both dishonest journalism and a widespread mistrust of journalism are bad for the survival of democracy.

Another threat to be taken seriously arises from the deteriorating economic conditions facing segments of the industry.  With the rise of digital platforms across the internet, and with almost-universal access available to so many people, the established print outlets are faced with declining revenues from shrinking advertising and circulation.  These losses are resulting in layoffs of journalists and closing of newspapers, with a concomitant reduction in comprehensive coverage of local issues so important to us.

It is at the local level where much of what we citizens need to know is reported.  If all media outlets were global in scope, such as those found on the internet, who would inform us of problems facing us in our own communities and neighbourhoods?  One of the most important, yet undervalued, roles of local media is investigative journalism, inquiring on our behalf into questionable practices by government and private enterprises.

Who, other than those directly affected, would have known of the tainted-water scandals in Walkerton, Ontario or Flint, Michigan, for example, if local media had not persevered in their probes?  Who would be reporting chemical spills or pipeline leaks, if not responsible journalists?  Who else can rouse governments to action around contraventions of regulatory inspections of dairy- or meat-manufacturing facilities, for instance, that result in danger to the public?  Who will rail against the delays in bringing accused felons to trial in an overcrowded, underfunded court system—delays that result in the staying of charges and release of those persons because their rights have been violated?

Concerned citizens’ groups can’t do any of these things if they are not first made aware of the issues by the journalists who find and pursue them.  If we don’t have responsible investigative journalism at the local level, who will watch the watchers on our behalf? 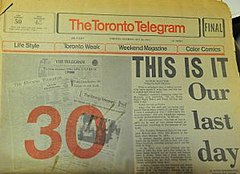 A third threat, perhaps the most serious, is posed by government.  The threat may arise from a well-intentioned, but misguided, attempt to bolster the media by subsidizing them through the public purse in order to maintain local coverage.

Or, more ominously, it may come from an unbridled attempt by government to discredit or even censor media outlets that don’t adhere to an ideological, doctrinal line.

The subsidizing of MSM outlets from public tax dollars, which at first blush could be seen as helpful in this era of declining revenues, is a two-edged sword.  While an infusion of revenue might well enable local media outlets to remain viable, thus allowing them to continue their reporting of the news, that support could come with strings attached.

What happens, for example, when the reporting of an issue is contrary to the government’s position on that issue?  Does the funding suddenly dry up?  Or does the coverage change?  Either option is a blow to a healthy democracy.

It’s a well-established maxim, after all, that (s)he who pays the piper calls the tune.  It would take a highly-ethical party on either side to resist the temptation to bully the other, or to refrain from caving in.

Censorship or assaults on the integrity of the media are equally evil, if not more so.  And even in prospering democracies, both can raise their ugly heads.  Just the other day, a highly-placed official in the recently-installed American government referred to the MSM as “the opposition party”, and said they should “keep its (sic) mouth shut.”  Although that official is the founder of one of those far-right news outlets (Breitbart)—which might lead one to expect such a stance—the tacit threat from one so close to the seat of power is chilling.

As I’ve written in previous posts, it is one of the expectations of the MSM that they must act as guardians of perhaps the most precious of all our rights, the right to free speech.  And a closely-related tenet in a democratic society is citizens’ right to a free press, unconstrained by government interference or intimidation.

When a government claims that media outlets disagreeing with the party line are dishonest, fake, and disgraceful, publishing deliberately false information, and involved in a running war with the government, there is a clear and present danger to those cherished rights.

In the face of such attacks, it is incumbent upon citizens to defend the media, lest we lose them—whether for economic reasons or other, more insidious, pretexts.  And we must defend all of them, far-right, far-left, and every outlet in between, because they all contribute to the dialogue that generates and nourishes a flourishing democracy.

Additionally, it is every citizen’s responsibility to make him- or herself aware of the widely-discrepant editorial leanings of those outlets in order to make sense of what they are reporting.  Otherwise, the media will be rendered unable to fulfil their essential mandate, which is—