Perhaps the only regret I ever harboured about having two daughters and no sons was that I couldn’t take them with me to the old barbershop.  I was informed early on that girls go to salons!

I always thought that was too bad.  Because, in spite of the razzing that most of us took from teasing friends after getting a haircut, it was always one of life’s most pleasurable experiences—well worth the minor annoyance of listening to wise-guys who persisted in asking why we got our ears lowered.

The pleasure I experienced stemmed from a number of factors.  For example, it was comforting to enter the crowded shop, find an empty chair, and pick up a copy of the daily paper.  It was a respite from the work-a-day grind.

Today, of course, I pull out my cellphone while I’m waiting.

Back then, a drowsy feeling would creep over me whenever I was sitting, waiting my turn.  The low murmur of voices, punctuated now and then by hearty laughter; the snickety-tickety of the scissors; the low humming of the electric trimmer—all came together to create a warm, relaxing rhythm.  I often had to be called back from some far-away place when my turn came, though I’d never left my seat.

And no one ever argued about whose turn it was.

Being in the old barbershop was a familiar experience, too—particularly if one had been going to the same barber for twenty-five years, as I did.  But for the prices, not much changed over all that time.  Except, of course, we the people, who had a front-row seat to (as Yeats put it) the sorrows of our changing faces.

In those long-ago days, the same red, white, and blue-striped pole was always spinning in the window.  And no matter how many times I studied it, the stripes always seemed to disappear into the bottom in mysterious fashion, only to reappear at the top and begin their descent all over again.  Or was it the other way around?

I never figured it out, and can still convince myself, if I try, that it was magic.

Throughout those years, the same mirrors ran along both walls of the narrow shop, with the same few cracks and discoloured marks, right where they’d always been.  I still remember my amazement when, as a young boy, I discovered I could see the back of my own head while sitting in the barber’s high chair.

Even today, in a different shop with different barbers—a man and two women, much younger than I—I’m intrigued by the number of reflections-within-reflections that can be seen in the parallel mirrors, reflections that run in a seemingly endless chain to goodness-knows-where.  The end?  The beginning?

Anyway, it was always a comfortable and cozy delight to go for a haircut, and reassuring, too.  In this world of ours, where change seems to be the only constant, it was a joy to go in and find everything just as it was when I left the last time.  All the tools laid out on the shelf in the familiar, haphazard arrangement; the bottles of variously-coloured liquids standing, twinned against the mirror; small piles of multi-hued hair swept into corners, away from the chairs; and talcum powder covering everything in sight with its fine, white mantle.

It was reassuring to know that Nick—my barber with his unpronounceable Greek surname—was ever willing to discuss the fortunes of the various sports teams we rooted for, and that he had all the answers to the problems that plagued them.  We probably had the same conversations a hundred times or more, but they always seemed fresh and enjoyable.

If you can understand and appreciate how I felt about that old barbershop, and if you can imagine the bonds that grew up over twenty-five years, then you might have some inkling of the trauma I experienced when I moved away.  It seemed impossible for the longest time to find that same comfort level in any of the many shops I tried.

But then, finally, it happened.  Just a few short blocks from where I live now, I stumbled across Joe’s Barber Shop.  There’s no Joe, anymore—he’s been retired as long as I have—but the folks who greet me each time I enter have become almost as familiar as the long-since-departed Nick.

My new shop is closing, however.  But not permanently, thank goodness; only for a few days, to move to a new location, one closer to where I live now.  By the time I need my next haircut, they’ll be comfortably ensconced in their new shop, still known as Joe’s.  And a spiraling barber pole will be there, too, to bedevil me as it always did.

One major difference will await me, though.  They’ll be sharing digs with a ladies’ salon, and the waiting area will be used by patrons of both.  Because of that, I expect the tone and tenor of conversations in the shop will be different than those I remember from my youthful days.

But there will be one wonderful change that I shall applaud heartily.  Young fathers with daughters will be able to bring their girls with them when they come for a haircut.  I envy them that pleasure. 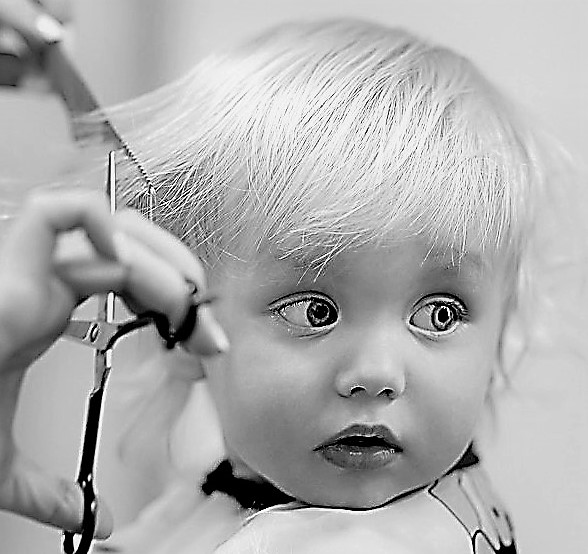 Because the only regret I ever harboured about the old barbershop was that I couldn’t take my daughters with me.