A number of years ago, my grandchildren were visiting their Nana and me when November 11th rolled around.

“Re-membrance Day,” I replied.  “It’s the day when we remember the soldiers who fought in the wars.”

“What are wars, Gramps?” the youngest asked.

I found it astounding, and heartbreaking, that they were still so innocent.  And I wished they could be so for always.

It was difficult to explain the premise of warfare to them—the sheer gall and hubris and stupidity of humankind in seeking to settle what are sometimes legitimate grievances by killing each other in remote fields of mud and gore.

I couldn’t convey the sense of awe that washed over me, when I had stood years before in one of the cemeteries where poppies blow, between the crosses, row on row—scarcely able to believe the enormity of the carnage.  Nor could I explain to them how I was brought to tears by the simple inscription on too many of those markers—

Here Rests in Honored Glory, A Comrade in Arms, Known But To God 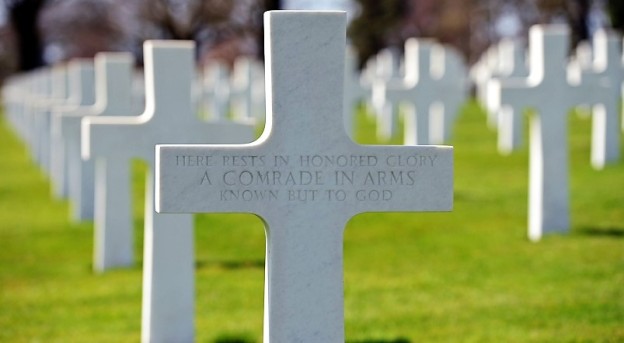 Despite the fact that they couldn’t really understand, I told them we try now to remember the men and women who gave up their lives in defense of our country and its values, in all the wars in which our soldiers took part.

“Why do we hafta remember them?”

“Well, I guess it’s because we hope we won’t ever have to fight a war again,” I said.

Even as I talked about it, the thought occurred to me that the war with the most significance for me is one I don’t really remember at all.

My parents did, though.  For them, it was the war, one of the most significant events in their lives, an event that shaped many of their attitudes and beliefs forever.

My recollection of that war has come through them, formed as impressions and feelings, prompted by bits of memorabilia, by oft-repeated stories, or by the singing of wartime songs.

I have a picture in an old family album, a now-faded snapshot with large white borders and scalloped edges.  It was taken at Christmas time in my grandparents’ living room during the winter of ’44.  I’m in the picture, right in front on my mother’s lap, not yet two years old.  The whole family is gathered around us beside the Christmas tree.

My mother’s parents are there, and her three sisters.  Her sister-in-law and two of her cousins complete the group.  With the exception of my grandfather (and me, I suppose), there are no male persons in the picture…no sons, no brothers, no husbands.

Whenever I look at it, I try to imagine what that Christmas must have been like for my family, most of them younger than my own children now.  I think about a song that became popular around that time, a young soldier’s promise that, “I’ll be home for Christmas…if only in my dreams.” 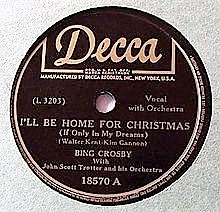 So, when my young grandchildren asked about Remembrance Day, I tried to convey those same feelings to them.  Not what war was really like, because I don’t know.  Rather, how I still feel when I hear that song at Christmas time, or when I look again at that old snapshot.

I told them about my aunt who married her beau mere days before he shipped out, and that they didn’t see each other again for more than three years.  How he met her brother—his new brother-in-law—for the first time while they were both stationed in England.

Not one of my family’s young soldiers was home for Christmas that year.  One of them, an uncle I might have grown to love, never did come home.

I remember hearing my parents talk of them long afterwards.  I’d hear words and phrases that prompted my recollections—words like wartime and overseas, or phrases such as V-E Day and killed in action.

“If Jimmy had come home from overseas,” they’d say, “he’d be almost eighty now.  Can you imagine!”

Together, they’d sit quietly, thinking back, I guess—remembering how it was.

I knew my grandchildren would not be able to comprehend a war that ended more than half a century before they were born, or even understand what their great-grandparents went through.  But, in hearing about it from me, I hoped they would develop some sense of the meaning of freedom and democracy, and of the sacrifices that were needed and made.

And I hoped that, once they knew, perhaps they’d understand why we remember.

4 thoughts on “For Always”