It happens sometimes at a restaurant where three or four couples are dining together.  I look up from my soup to find myself alone at our table, the others at the salad bar or in the washroom, perhaps.

Or it could be at a dance, nine or ten of us sharing a table, and I’m suddenly sitting by myself while the others are up dancing, or maybe table-hopping.

The tiresome jokes flow at these moments, naturally.  Some wise guy will ask in a loud voice if I’m dining tonight with all my friends.  Or some other wit will wonder if I did something to offend everyone in my party.

I laugh, of course, perfunctorily—but somewhat puzzled, too—for it is curious that this crops up with me so frequently.  Was it something I said?

It may happen to others, too, I suppose, but hardly ever when I’m around.  And although the jokes are stale from repetition, they do take my mind away from a somewhat more sombre realization—that someday, we know not when, one of us in our gang will, indeed, be left alone.

We’re at an age where many of the things we used to take for granted are likely not in the cards for us anymore.  How many of us will purchase a new house, for example, with a twenty-year mortgage?  Do we really care if the 2040 Olympic Games are held in this city or that?  Are hair transplants or facelifts really such an attractive option now?  How many more new cars will we buy?

We’re not yet at the stage where we won’t buy green bananas (another old joke) or make plans for some holiday cruise two years from now.  But those days are coming.

Aging is a simple, yet so mysterious a process.  Simple, because it creeps up on us without any conscious intent on our parts.  We start school, we graduate, we marry and become parents.  We raise our children, sadly (or not) bid them adieu when they embark upon the world, and exult in the joys of grandparenthood when they begin their own families.  Eventually, we retire and reach out for new and exciting pastimes.

Granted, it took years for me to do all this, and the work was palpable while I was doing it.  But when it finally hit, my seventy-fifth birthday seemed to have materialized out of nowhere.  Getting there was a simple matter of waiting.

But aging is mysterious, too, because so many odd things transpire.  For instance, although I feel like the same person I always was, my friends are obviously getting older.  Occasionally, when I happen to spy one of them unexpectedly, I see first an old man or woman—only to realize belatedly it’s my friend.  I suspect the same thing might be true in reverse when they have a chance encounter with me.  We’re all too polite to tell each other that, though.

A lyric from the musical, Fiddler on the Roof, seems to capture it:  I don’t remember growing older, when did they?

A few years ago, I underwent some serious surgeries, not necessarily age-related, and spent several months in follow-up visits with the medical people who treated me.  When reading my files one day, I was quite surprised to discover a letter from a referring physician to a specialist who had treated me.  After the usual introductory paragraph, the letter stated, “This elderly gentleman presents with symptoms congruent with…”

My attention was riveted on those first three words.  I thought I had opened someone else’s file!  Elderly?  Surely not I!  And yet, at the tender age of sixty-four, it was true—at least from the perspective of those young professionals.

And so, here we are, I and all my friends, firmly ensconced in our senior years.  None of us talks morbidly about the inevitable end of our lives; more likely, we’re comparing our golf scores, sharing the latest stock market activity, or showing off pictures of our grandchildren.  We’re a pretty happy lot, all told.

One of us, a retired funeral director, jokes that he used to sign his letters Yours eventually.  “They’re gonna get us in the end,” he says with a wink.

I do think about the end-stages of life, however.  Like finding oneself left alone at the table in the restaurant, or at the dance.  A close friend from boyhood never got to experience that aloneness, dying before his time just over a year ago, surrounded by family and embraced in the thoughts of his many friends.

My parents, on the other hand, lived well into their nineties—not a guarantee of longevity for me, I grant you, but a pretty good genetic gift.  At the end of her life, my mother had outlived her husband, all her siblings, and all her friends.  Despite the visits from children and grandchildren, I know her final years were painfully lonely.

We cannot know the hour or manner of our own passing, so it’s futile to fret about it.  Yet I occasionally ponder whether it would be best to go first, before everyone else has passed, or be the last one standing (or sitting, or lying down…whatever).  So much of the joy of life comes from those around us, family and friends, and so much would be missing without them.

I’m unable to decide with any certainty which option I’d prefer.  I waver from one to the other, depending on my mood.  Vacillation can be a comfort.  Truth be told, there is no definitive answer to be found; what will be, will be. 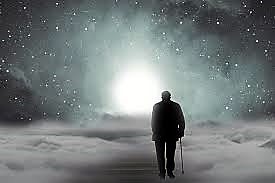 But honestly?  I don’t think I want to be the last one at the table, wondering in vain if it was something I said.