Some friends were chatting recently in the park about the ins and outs of aging, a not-unusual activity for a group of greying septuagenarians, I suppose.  After listening for awhile, I excused myself from that rather depressing conversation, preoccupied by the thought that there seem to be far more ins than outs as one grows older.

It’s as if the in-words are in, and the out-words are out.  In roughly alphabetic order, I’ve identified some of those nasty in-things we were talking about.

The first was the inability to do many of the things we used to take for granted—running up the stairs, for example.  It’s more likely now that we’ll fall down those stairs.

There is the foreboding spectre of incontinence lurking, an affliction that has already befallen some of my comrades—leaving them, to their chagrin, in-diapers.

Ailments such as that—and others too numerous to count—can be the source of a profound sense of indignity unless one is possessed of a massive sense of self-worth.  We are lessened, somehow, when we lose our pride in self.  As we read in Ecclesiastes, Vanity of vanities, all is vanity!

With some of us (and I do concede for me, too), there can be a greater tendency toward infantile behaviour as we age, particularly when we don’t get our way—in a domestic disagreement, perhaps.  Whenever I discover I am moving in that direction, I try to remind myself that my wife is not my mother, and so I should abjure childish behaviour. 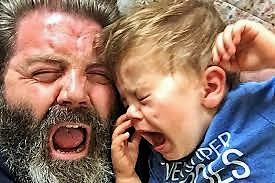 In many such situations, I find myself adopting a gratingly ingratiating manner in order to convert, or perhaps cajole, my wife to my way of thinking.  Prostrating myself, as it were, to attain my desires.

So, when it doesn’t, and because I have fewer inhibitions now about my deportment, I occasionally fall into a visible funk, sink into a sulk, and refuse to talk further.  I just clam up.  But my silence, I’ve found, is always more appreciated by my wife than by me!

However, I am never so injudicious as to remain non-communicative for very long.  Dinner-time inevitably rolls around, and my wife—the head-chef to my sous-chef/clean-up guy—is long-past the stage of guessing what I’d like for supper.  If I don’t speak up, I could well be fasting ‘til dawn.

That possibility is at-all-costs to be avoided, for during the course of my seventy-plus years, I have learned that failure to eat leads my body to a virtually inoperative state, placing me indeed in-peril.

Despite all these puerile behaviours, I am quite a nice person (or so I’ve been led to believe by folks who are still my friends).  Therefore, I try not to present as insufferable to those around me, lest they will no longer be.

Intransigence on my part—on any subject, at any time—is more likely to lead to a parting of the ways with my friends than to any kumbaya coming-together.  So, I make every effort to remain amenable and open-minded.  It kills me sometimes.

Perhaps the most difficult of the in-words as one ages is the realization that we risk becoming ever-more invisible—overlooked by the younger generations as they rush pell-mell through their daily routines.  No one ever wants to think (s)he has become unimportant in the world we still inhabit, but many of us come to fear it is so.

Anyway, the next time I’m chatting with those same greybeards whose conversation prompted these gloomy contemplations, I think I’ll try to present them with some out-words that might lend a more optimistic tone to our stage of life.

We need more outs than ins!

4 thoughts on “The Ins and Outs”