The writers’ group I meet with regularly issues ‘prompts’ for us to generate story ideas, for presentation at our gatherings.  One of the most recent asked us to write about ‘oceans’—whatever that word might bring to mind.

I hit upon teenage angst as the setting for my piece, which I entitled By the Ocean.  Here it is for readers of this blog who might remember the heartbreak of summer love—

Despite my repeated efforts to block them out, the mocking words and melody keep running through my head—

On a day like today, we passed the time away,

Writing love-letters in the sand…

Not love-letters exactly; just a big heart drawn on the beach with a stick, an I on the left, a YOU on the right.  We’d spread a blanket inside the heart and lie beside each other, resting, oblivious to the comings and goings of the other surfers.  There was only us and our boards.

Sometimes we’d just stare at the ocean, watching it crash ashore, pointing at the big waves others were carving.  Abby would say she could see charging white stallions in the surf, like a painting she once saw, but I could never see them.  All I ever saw was yellowish foam, flecked with flotsam, washing up on the beach.

As each afternoon wore on, the water would creep ever closer to us on the incoming surge, until finally it would lap at the very edge of the blanket.  We’d pack up then and head for higher ground.  She’d laugh each time we saw the tide take our love-letters in the sand, washing them away as if they’d never existed.

Those were my favorite times, those late afternoons, both of us exhausted from surfing the breaks and bombs, when the sun hovered precariously above the horizon before plunging into the ocean.  The tips of the waves were almost pink as they rose and fell pell-mell on the sand.  The water behind them had a slick, green sheen on either side of the wide, diamond-dancing path across the surface that led from us to the sun.

The ocean’s power was immense, like the love we had for each other.

I’m alone on the blanket now, though, and that cursed song keeps playing in my ears—

You made a vow that you would always be true,

But somehow that vow meant nothing to you…

I’m not sure when things changed, or why.  All I know is that, by the end of the summer, Abby was no longer surfing.  Not with me, and not with anyone else as far as I knew.  She quit returning my calls, and finally her mother told me to stop phoning.

I must have sounded pretty low because, even though she’d never approved of me—that beach-bum, I overheard her call me once—she explained that Abby had gone away to school.  Wellesley, I think she said, somewhere back east.  Not even a goodbye.

I didn’t bother to answer.  Back to the beach is where I was going.  I’d grown up by the ocean, following my father from competition to competition up and down the state.  Even got to Hawaii once.  He won lots of trophies, not much money, and now, in his early-forties, he’s desperately clinging to that surfer-boy persona, the only thing he knows.

They’re still together, though, him and my mother.  She cleans house for the rich-bitches on the cliffs overlooking the ocean, earns enough to keep us in the old double-wide on the outskirts of Surfside Acres, a patch of scrubland north of the beach.

I worked part-time all through high school at the Hang-Ten Board Shoppe, which is as tacky as its name.  Paid enough to suit me, though, and I got to try all the latest equipment.  Now that I’ve graduated, finally, I’m hoping to pick up a few more hours, maybe earn enough to buy a set of wheels.

I hung up without replying.  She didn’t care, and, apparently, neither did Abby.

The surf is up today, the orange sun falling slowly behind scattered clouds to its rendezvous with the edge of the world.  Only a few people lie scattered on the sand, a few more out on the water.  I watch the waves creeping ever closer to the blanket, wishing Abby were here, knowing she never would be again.

I can imagine her friends talking about us.  Abby?  She’s at Wellesley.  Bode?  Still at the Hang-Ten.

Yeah, that’s me alright.  Despondent now, I resign myself to what I’m about to do.  Leaving my board by the blanket, I’ll wade out to waist-level, and begin the final journey from there.  I know the incoming waves are strong, but they won’t be a problem for someone who’s been surfing since he was eight years old. 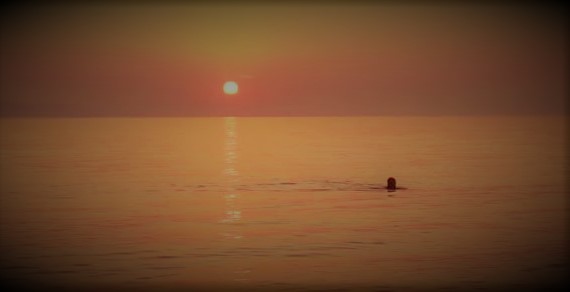 I’ll follow that familiar, sun-dappled path on the surface toward the horizon—swimming freestyle, breathing easy, arms reaching, legs kicking.  I’ll harbor no second thoughts as the distance between me and the beach increases, stroke by stroke by stroke.  If someone on shore sees me, it won’t matter.

Pretty soon, I’ll feel myself tiring, but I won’t pause to look back.  Once I’m out beyond where the waves form, still swimming toward the sun—wondering if I’ll reach it before it’s extinguished by the ocean—it’ll be too late.

When my arms turn leaden, and my legs hang uselessly behind me, I’ll realize I’ve stopped for the last time.  And the damn song will start up again—

Now my broken heart aches with every wave that breaks

Over love-letters in the sand…

And as the song dies, so will I, swallowed by the unfeeling ocean.

I’m ready to do it now, but as I clamber to my feet, I spy Mary-Lou, Abby’s friend—the tiny one who always had a shy smile for me, the one Abby never let me get too close to.  She’s by herself at the water’s edge, holding her board, apparently unsure about going out alone.  Despite the heartsick funk I’m in, she looks mighty fine in her two-piece.  Rad!

When she sees me standing there, she waves and smiles, beckons me over.  I hesitate a moment—conflicted, my emotions chaotic—and then impulsively, I grab my board and trot towards her.  I feel a huge grin spreading across my face.  And as I get closer, another song breaks out in my head—