Every winter for quite a number of years, my wife and I used to head north, without the kids, for a weekend of cross-country skiing.  But as I think back now on those long-ago days, for the life of me I can’t figure out why.

In the first place, we weren’t off to a palatial, resort lodge with all its pampering amenities.  Rather, it was one of the provincial government’s natural resources centres, a rather Spartan setting in the deep woods. 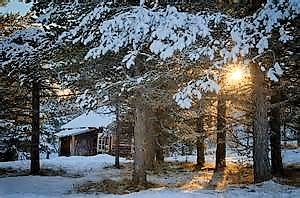 We shared a bedroom there, in one wing of a large dormitory where thirty other couples inhabited bedrooms of their own.  Our room, approximately three metres wide, had a narrow cot mounted on each side wall.  There was room for only one person on each bed—not exactly conducive to second-honeymoon flights of fancy.

On the outside wall, there was a large, frosted window; light leeched in, but no one could see out.  At the end of each bed, near the window, a number of ill-fitting drawers were built into the wall.  There was no closet.

I had lived in student residences that were more luxurious.

One large bathroom, complete with three shower stalls, served all the men on our floor, as well as the men from upstairs.  A similar bathroom, designated for the women, was situated on the second floor.  Woe betide the morning-drowsy lodger who mixed up the two.

Consequently, unlike the apres-ski gatherings at luxurious ski-lodges, our social exchanges tended to occur early in the morning and late at night, as we passed everyone else on the way to and from the bathrooms.

Our friends used to wonder why we kept going back.  And we’d tell them it was because of the excellent skiing; however, that’s only partially true. 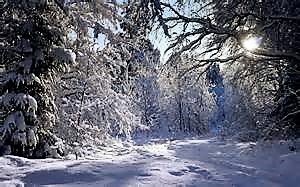 As a skier, though, I left a little to be desired.  My problems always started in the waxing-room, where everybody gathered after breakfast to prepare their skis for that day’s snow conditions.

Each of the four or five people I’d check with would be using a different colour of wax.  So, to be on the safe side, I’d use them all, resulting in a rainbow of colours on the bottom of my skis.  Occasionally, someone would call out that we should be using klister.  Assuming that klister was a preparation for use on one’s blisters from the previous day’s outing, I always chose to ignore that advice.  I was no sissy!

While the others laboured away indoors, I would head outside and plant my feet securely into the harness on my skis.  Stamping impatiently in the cold, waiting for the others while watching my breath dissipate in frosty wisps, I’d often experiment a bit.  For example, I would try to turn around in place by lifting one ski over the other, and setting it down in the opposite direction.  The manoeuvre could then be completed by pushing the second ski back and out to one side, toe down, to bring it around in line with the first.  It looked so cool when other people did it.

Predictably, however, I usually lost myself in this complicated operation and found I was unable to move my feet because of the skis they were trapped in, one facing forward, the other backward.  Powerless to extricate myself, I’d resort to falling face-forward into the snow from a standing-still position.

Once rescued and set upright, my adventures would continue on the trails, where, thanks to the plethora of wax I had applied, I could find no purchase.  On downhill slopes, I bounced and careened, verging on the out-of-control, until a friendly sapling would reach out to embrace me, interrupting my headlong rush to oblivion.  My companions always insisted I go first on these downhills, which I interpreted as a testament to my intrepid spirit.  Those sharp turns at the bottom were brutal, though. 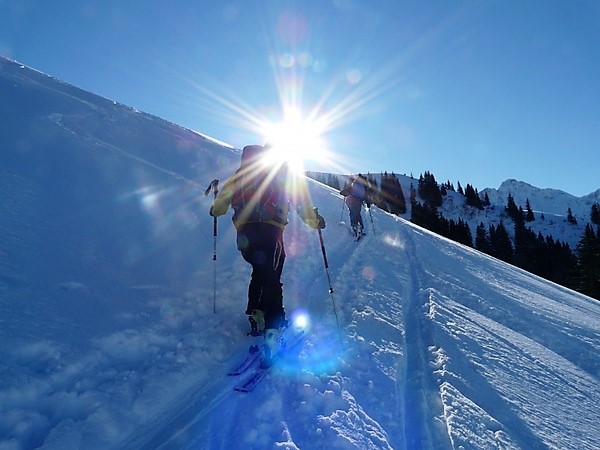 The cohort began to refer to me (flatteringly, I wanted to think) as a bushwhacker.

On uphill stretches, I would slide inexorably into the folks skiing behind me, my once-but-no-longer-friendly comrades.  When they eventually demanded I go last on the uphills, I blithely assumed they wanted me there to be of assistance to any who faltered.

My eventual return to the dormitory was always heralded by one and all as a triumph of random chance over probability.

So, as you can see, it wasn’t the austere accommodation or my skiing prowess that brought me back each year to that wilderness outpost.  I may have been inept [ed. note: was definitely inept], but I was never an ascetic masochist!

I suppose it was the other things we found there that kept us coming—things like good friends (they’re the ones who hadn’t yet skied behind me), bountiful and delicious food, and a time to be alone with one another—even if in separate beds.

I always looked forward to going on those survival-skiing trips—although I must admit I was equally glad when it came time to head home.  I sometimes wish I could still strap myself in to those fibreglass wings and fly away, happy once again to lose myself on the wintry forest trails.

Alas, I fear now that the only thing I’d lose would be my life!