From early childhood I was fascinated by stories of Africa, peculiarly referred to as the dark continent.  As a young boy, I devoured the tales of Tarzan of the Apes, in both book and comic-book formats, and later through television and movies.  I fancied the entire continent covered in thick jungle, which I would effortlessly travel as Tarzan did, swinging on innumerable vines from tree to tree to tree.

The fact that I wasn’t strong enough to climb the rope-swing in my own backyard didn’t seem to intrude upon those dreams.

Later, as my interest in history grew, I moved on to stories of the intrepid, imperialistic adventurers who sought to colonize the continent for their respective European nations.  Men (they were always men) from Belgium, Britain, France, and Germany rushed to claim vast domains on behalf of king and country.  I imagined myself striding in the company of such worthies as Mungo Park, Richard Burton, John Speke, David Livingstone, Henry Morton Stanley, and Cecil Rhodes, bringing glory and honour to the homeland. 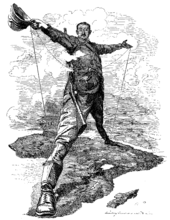 In the space of little more than forty years, beginning in 1870, European control of Africa jumped from 10 percent of its landmass to 90 percent, a stunning demonstration of greed and expansionism.  The most avaricious nation was Britain, which controlled vast tracts, including the Nile valley and the Suez Canal after invading Egypt in 1882.

It didn’t occur to me back then that such heroic deeds resulted in enslavement of the indigenous peoples, and wholesale looting of the continent’s plentiful natural resources—gold, silver, diamonds, salt, petroleum, and cocoa beans among them.  In my callow innocence, I gave no thought to the consequences suffered by the conquered.

Eventually I graduated to a study of the more complex history of warfare in Africa, struggles between European empires fought on African soil.  The Dutch, French, and British, who fought initially against indigenous peoples to steal their land, found themselves inevitably clashing with each other over competing claims.  The most famous of such conflicts are, perhaps, the first and second Boer Wars fought by Dutch settlers against British imperialists in what is now South Africa, the tales of which captured my imagination completely.

No less a personage than Winston Churchill, then a young subaltern in the British army, first made a name for himself after a daring escape from a Boer prisoner-of-war camp.  In school, we learned to sing a stirring song, Marching to Pretoria, which was sung by British soldiers as they made their victorious way to the Boers’ capital city.  I think I was the only one of my classmates to have any inkling of its significance.

My understanding of Africa, therefore, was heavily influenced by a British bias; he who wins the wars writes the history, after all.

Never in my life, however, did I actually visit the dark continent.  Not until now, that is.  As I write this post, I’m sitting in a beautiful room in Aquavit, a delightful Bed & Breakfast overlooking the town of Plettenberg Bay in South Africa, with a view of the Indian Ocean to the left and smoky, blue mountains all around.  Our hosts, Linda and Ole, are not imperialistic plunderers from the past, but expat Americans who call this country home.

It is nothing like the Africa of my youthful ruminations.  The flora and fauna are different from what I’m familiar with, but they are different, too, from the jungle tangle I might have expected from my Tarzan reading.  On our journey by car along the byways of the southeastern coast, we have seen our share of animals not found in North America, of course—baboons, zebras, ostriches, an astonishing variety of antelope—and we shall see many more on an upcoming safari adventure.

Despite the warring history I once lapped up, we have found no enemies of any political persuasion or ethnic background; only a warm, hospitable people who wave and smile at every opportunity.  It has been easy during the three weeks we’ve been travelling here to learn to feel at home.

In the company of good friends, Evelyn and Larry, we have stood at the Cape of Good Hope with the Atlantic Ocean lapping at our feet, and climbed high up on Cape Point, almost the southernmost tip of the country.  We have swum in the Indian Ocean and walked the sandy beaches it pounds with its endless surf.  We have ventured into several off-road places—Table Mountain near Capetown, which we conquered via cable-car; the De Hoop Nature Reserve, where we encountered penguins unique to South Africa; a remote farmhouse where we were treated to a delicious luncheon of salads, cheeses, breads, and wine, all home-grown and produced.  And we have boldly gone under the ground, into the renowned Cango Caves, where we were amazed by the subterranean beauty of the eerie caverns.

The English words to the national anthem truly sum up my impressions of this marvellous country, now that I have seen even a part of it:

Ringing out from our blue heavens, /From the depths of our sea, /Over our everlasting mountains, /Where the echoing crags resound!

Sounds the call to come together, /And united we shall stand, /Let us live and strive for freedom /In South Africa our land!

It has been the trip of a lifetime, and we have three weeks still to go.

7 thoughts on “The Dark Continent”