A few years ago, we sold our home in Florida and I retired from playing ball.  Once the decision was taken, it didn’t seem like such a big deal.  There was no special celebration or ritual ceremony to mark the occasion.  After all, several of my friends had already made the same decision before me.  And furthermore, when it came right down to it, nobody really cared.

However, last spring we purchased another Florida home, and as this past autumn approached, I began to have second thoughts about that retirement.  I began to question if I could actually carry through with the decision.  I mean, how would I weather another winter in Florida without playing ball?

As September gave way to October, the sunshine state beckoned us again, and, with a sense of quiet desperation, I began to search ‘midst the debris of a sporting life for my trusty old ball glove. 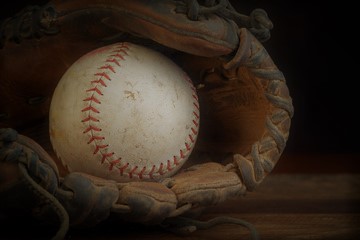 My wife (whose university degree dealt with biology, physiology, kinesiology, and other -ologies having to do with the human body) tells me that the average male person attains his physical peak around the age of twenty-six years.  If she’s right, that would mean I am fifty years beyond my glorious prime.

These days, I can’t remember what I was even doing when I was twenty-six, let alone how well I might have been doing it.  But I’m pretty sure I was somewhere playing softball, for somebody.

Now I have to admit that, with my level of athletic prowess, it’s difficult to tell if I ever actually reached a peak!  Regardless, I’m long past the point where even I could think of myself as a player ‘on the way up’, a kid ‘with a future’!

A few winters ago, before my decision to retire, several little things occurred on the playing field that, by themselves, weren’t especially significant.  Taken together, though, they presented a pattern which had led to my giving up the game.

First was the change in the distance between the bases; it got longer!  Either that, or I began to slow down.  And, for a ballplayer who couldn’t hit his weight, who threw three-bouncers from centre field to the infield, speed on the base paths was a commodity I sorely needed.

I also noticed I had stopped caring who won the game.  What mattered more to me was that I got to play my innings.  I don’t think my teammates knew, because nothing changed outwardly in my approach to the game.  But I knew, and I worried about it.  I mean, who wants to be on a ball team with someone who isn’t even competitive anymore?

The clincher, however, was a fall I took in the outfield, after [ahem] catching a long fly ball.  It was similar to dozens of such falls in the past, except this time I tore some ligaments in my shoulder.  Surgery was required twice—once to insert two screws, and again to remove them.  Those were not fun.

Consequently, when we sold our home, I retired.  Hung up the cleats.

However, upon my recent return to Florida this fall, I heard about the first meeting of the new season, to organize teams for winter ball.  I wandered over to the ballpark, just to see who might be coming back.  And I took my ball glove with me for moral support.

Once there, of course, my crumbling resolve to be retired collapsed completely.  Surrounded by past teammates—and wondering how they all got so old—I joyously entered my name and signed on the dotted line.

I’m back! the boy inside me cried.

I probably still can’t hit for average, and my speed in the outfield will be tragically reduced on my gimpy knees, but I can still spit in the dirt and pound my glove.  So, sometime within the next couple of days, under a warm, winter sun, with all the other erstwhile boys of summer, I’ll trot—or totter—on to that field of dreams again.

5 thoughts on “One More Time”