It never crossed my mind on that rainy, August Saturday in 1967—our wedding day, as we stood on the threshold of our future together—that our golden anniversary would eventually arrive.  And now, fifty years on, it has.

Symbolic occasions have never resonated loudly with me, for whatever reason.  My wife and I have always celebrated family birthdays, of course, especially those of our children and grandchildren.  Wedding anniversaries, however, have come and gone with very little fanfare—although not without a sense of gratitude for our good fortune.

But it occurred to us a while back that, when two strong, independent people are able to spend fifty years with each other, weathering the storms and cherishing the good times, it is no small feat.  It is, in our case, a triumph of symbiosis over autonomy.  And so, we resolved to celebrate this one.

Our wedding coincided with Canada’s 100th year as a nation; indeed, we joked that getting married was our centennial project.  Now, as the country celebrates its sesquicentennial, we marvel that we have been married for fully a third of its existence.

For some time, we cast about for ideas as to how we might mark the momentous occasion.  We consulted with friends who have already achieved the milestone, we spoke with our children, and we talked with each other, long into the night many times, searching for the perfect way to celebrate.

You’ll never guess what has come to be.

On the very anniversary date of our nuptials, my wife will be a member of the audience in a darkened theatre, while I, a lifelong singer of songs (but never publicly), will be sharing the stage with my comrades in a barbershop harmony chorus, sixty-five-men strong, for a night of music in Muskoka.

Had you asked me those fifty long years ago if I thought such a situation could ever come to be, I’d have regarded you as mad.  Yet, there I shall be, one voice among many in the mighty Harbourtown Sound, singing my heart out.

This being Canada’s 150th birthday year, the programme will contain several songs of Canadiana, two of which you may hear now, should you choose.  The first is Fare Thee Well, written by John Rankin of Nova Scotia—

The second, Hallelujah, is from Leonard Cohen, and one of our favourites to perform.  It may be found at the end of this post.

Both songs will be sung in harmony with our hosts for the concert, the Muskoka Music Men, a local barbershop chorus.  Our chorus will be singing several other songs, as well, including selections from Broadway, Motown, and the more traditional barbershop canon.

My wife and I did take an extended trip earlier in the spring, as part of our golden year, and we shall be together with our children and grandchildren for a special celebration later in the summer.  So the concert is not a one-off commemoration of our special year, just one part of it.

Given my love for the music, I can’t think of a more enjoyable way to end the journey to fifty years, and begin the voyage to sixty years, our diamond anniversary.  And for that prospect, I offer up, Hallelujah—

Six syllables, sliding sibilantly over the tongue—ses-qui-cen-ten-ni-al.  One-hundred-and-fifty years as a nation, a vision struggling hesitantly to life on 1 July 1867.  Christened the Dominion of Canada, we were four provinces united against the manifest-destiny expansionism of the mighty republic to the south, but nestled still in the colonial arms of the imperial British embrace. 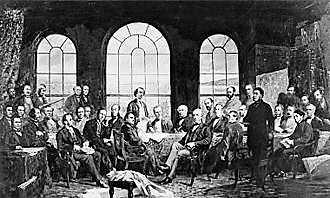 The first priority of this new nation?  To fulfil the calling of its soon-to-be-adopted motto: Ad Mari usque ad Mare—from sea to sea, the Atlantic on the east, the Pacific to the west.  And eventually, a third sea, the Arctic to the north.

And so it happened, the inevitable northward and westward reach, propelled and supported by the building of a transcontinental railway.  After the original four provinces—New Brunswick, Nova Scotia, Ontario, and Quebec—there followed: Manitoba, 1870; British Columbia, 1871; Prince Edward Island, 1873; Saskatchewan and Alberta, 1905; and Newfoundland, 1949.

And what exactly is it we celebrate on this sesquicentennial?  What have we accomplished as a nation?  What are the values we stand for?  How do our actions and behaviours, both collectively and individually, demonstrate those values?

What does our country do for us?   Even more importantly, what do we do for our country?

It has been noted by critics, perhaps jealous of our good fortune to be situated on the northern half of the North American continent, that too many of us are apathetic about the affairs of our country—to which, in response, some of us simply shrug our shoulders.  Others, though, rally to the causes of the day, to try to influence the course of events, the outcomes, the future.

There is a long list of accomplishments of which we might be justifiably proud.  In the realm of medicine, the discovery of penicillin, insulin, and stem cells; in the sciences, the first light bulb, the telephone, Canadarm, and IMAX; on the world stage, international trade agreements, endeavours to control the deleterious effects of industrialization on climate, efforts to support peacekeeping initiatives around the world, a robust military response in defence of freedom during several major wars, and our welcoming of refugees displaced by global conflicts, regardless of their ethnicity, religion, or skin colour; and in a more frivolous vein, the invention of peanut butter, the WonderBra, basketball, and Superman.

Of course, there are chapters in our history that might, with today’s sensibilities, bring a sense of shame: the exploitation and displacement of Indigenous peoples, and the horrors of residential schools; the trivialization and suppression of women’s rights; the mistreatment of Chinese and black immigrants; the expulsion and internment of Japanese-Canadians; and the continued exportation of asbestos to developing nations, even after it was banned in Canada.

None of these might happen today because of a singular document: the Canadian Charter of Rights and Freedoms, adopted in 1982.

Governments of the day, to be fair, have apologised for the worst of these past crimes, and have established commissions and inquiries to seek a better way going forward.  But it is questionable, still, how much influence their reports and recommendations have had, or will have, on the future; witness the Truth and Reconciliation Commission, or the Missing and Murdered Indigenous Women and Girls Commission, and assess for yourself their lasting effects on national affairs.

As in everything, actions speak more loudly than words.

Still, when I ask myself if there is any country in the world I would prefer to live in, rather than in Canada, my answer is a resounding No!

Despite the tumult and the shouting perpetually foist on us by the lunatic-left and rabid-right of the political spectrum, we are a people that wants leadership to govern from the centre.  We favour moderation, not extremes; tolerance, not xenophobia; dialogue, not diatribe; ideas, not ideology.

Do these tendencies render us apathetic?  I hope not.  Rather, I choose to think of us as slow to anger, quick to forgive, strong in the face of adversity, proud of what we have accomplished, and determined, not only to rectify the errors of the past (even if all too slowly at times), but to avoid similar mistakes in the future.

Canada has had one-hundred-and-fifty years of practice with the concept of nationhood now, and still she carries on—both because of and in spite of, the behaviour and attitudes of her citizenry.  Count me as one who is proud to be called Canadian.