When he was nine or ten months old, our grandson made a new friend.  Although quite small at the time, he was nevertheless much bigger than his friend—a little brown teddy-bear, stuffed with cotton-fill, hand-crocheted by his Nana.

Our little boy was troubled at night during his first several months, restlessly tossing in bed when he was supposed to sleep.  Colic, wetting, and unnamed fears conspired to keep him awake in spite of his obvious fatigue.

Yet, within a couple of weeks of meeting his new friend, he began sleeping much more soundly.  He would hold his teddy-bear tightly in his arms when he was tucked into bed.  Hours later, one might find the two of them, still closely snuggled, apparently a source of comfort and peace to each other.

As infancy gave way to boyhood, the pattern didn’t change.  The two friends, parted during daylight hours, would never fail to meet again at nightfall, falling asleep in each other’s company.

In due time, our grandson was old enough and eager to trundle off to school.  Over the course of his first two years, he formed strong relationships with new-found friends.  He learned to play with them, to share the same experiences, to discover the wonders of the wider world around them.

But always, at day’s end, when all his other friends were home, our grandson came back to his teddy-bear.  And the teddy-bear was his faithful friend. 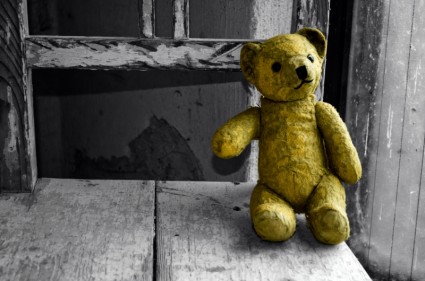 One day, a schoolmate came for an overnight visit.  Our grandson—somewhat abashedly, I think, now that he was eight years old—put his teddy-bear aside, out of sight of his visitor.

“Don’t you want your teddy?” his mother whispered quietly before turning off the light.

“Not tonight,” came the muted reply.  So the teddy-bear was placed in the back of the closet.  And forgotten.

Some months later, in the company of other friends who were visiting, our grandson came across the teddy-bear while searching in the closet for another toy.

“Hey!” exclaimed one of the other boys, picking it up curiously.  “Is this your teddy-bear, or what?”

“Nah,” our grandson said.  “It used to be mine when I was just a kid.”  He took it from his friend and tossed it carelessly back in the closet.

A few days later, his mother asked him about the teddy-bear when he came home from school with his friends in tow.

“I’m packing up some stuff for the church bazaar this coming weekend,” she said.  “I thought I’d throw in your teddy-bear, unless you still want it.”

With a quick glance at his friends, our grandson said, “I don’t want it.  You can give it away.”

So, the friendship died.  And our grandson didn’t seem to miss his oldest friend; not, at least, until the day of the bazaar.

Our grandson moved closer.  And there on the table, all but reaching out to the crying child, was his old teddy-bear.  Alone, without his friends around, our grandson looked almost ashamed that the teddy-bear should even be there.  He stared at his old friend for several moments, until, seized by impulse, he proffered his dollar to the saleswoman behind the table, grabbed up the teddy-bear, and took it to the little boy.

The youngster did.  And the teddy-bear, resurrected, wrapped his arms around his new little friend.

As we walked away, our grandson looked at me.  “What’s wrong, Gramps?  Have you got tears in your eyes?”

I lied and said no.