Cruisin’ down the river/On a Sunday afternoon…

That old song has been running through my mind this past week as my wife and I, in the company of good friends, have been cruising the rivers of Belgium and The Netherlands. Aboard a luxurious riverboat, we’ve visited several ports—Amsterdam, Hoorn, Arnhem, Antwerp, Rotterdam—all of which have offered up their unique charms.

History is everywhere around us, in town squares dating back to the 15th century, in cathedrals still calling the faithful to worship, in castles forlornly standing watch over long-lost fiefdoms. Even the cemeteries have their tales to tell to any who care to stroll their grounds, reading epitaphs on crumbling headstones.

More recent history is in evidence at Arnhem, site of a failed offensive against Nazi forces by the Allies in 1944 (and subsequently portrayed in the 1977 film, A Bridge Too Far). The famous John Frost bridge, destroyed by the Germans to disrupt the Allies’ supply lines, once more spans the Nederrijn River, testament to the resilience of the Dutch people who welcomed the liberating forces in 1945.

It is Kinderdijk, however, that has proven the most fascinating. Nineteen windmills, most constructed during the 1700’s, one in the 1400’s, still perform their essential function of pumping water from canals draining the countryside into sluices that take it over the dikes and into the Lek River. The land here is four metres below sea level. 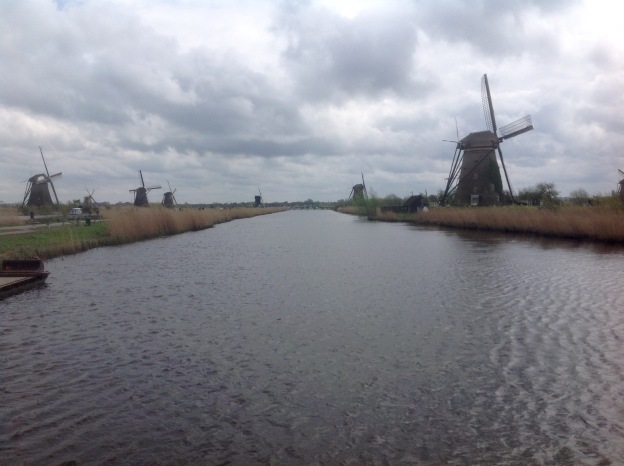 Each windmill is inhabited and operated by a family selected from a waiting list of more than two hundred. Someone must be on site to monitor the operation whenever the vanes are turning, but many of the residents have day-jobs in addition to their windmill duties. Accessibility to each structure is by boat, or via narrow footpaths, so cars are left in a communal parking lot when people come home.

Quarters are cramped inside, with very steep, narrow stairs leading up from level to level. Were I to live there, I’d need a hard hat to protect my head from the many protrusions and low sills. Windows are small, so much of the interior is dark, although electric lighting has improved the situation. In the olden days, before the installation of running water and sewage capabilities, residents shared their accommodation with rats, and shaved their children’s hair to counter lice.

Each of the four vanes, or wings, is a latticework structure, with fabric sails attached. When the wind is slight, the operator must climb the wings to unfurl the sails, in order to increase the velocity of the spinning wings; when the wind increases, the sails must be furled again. Each wing is stopped when it’s pointing to the ground, in order that it may be climbed. It is not a quick process.

The wings must also be rotated around the windmill to take advantage of the direction of the wind. A complicated construct of chains and pulleys allows the operator to do that, turning the thatched-roof cap of the windmill through 360 degrees until the optimal position is found. The procedure is virtually the same as that performed in the 18th century.

Up close, the structures look ungainly, ridiculous even. If function matched form, they’d have been abandoned long ago. But they’re still here, and still doing the job of keeping the sea at bay, as they’ve done for almost 300 years.

Even so renowned a warrior as Don Quixote could not shut them down.