I was weighed the other day, and measured.  And to my great surprise, I was found wanting.

There I stood, like a lamb for the slaughter—clad in undergarments and socks, a paper gown hanging ignominiously from my slumping shoulders—facing the long arm of the weigh scale, its pendulous weights being moved unrelentingly to the right by an unsympathetic nurse. 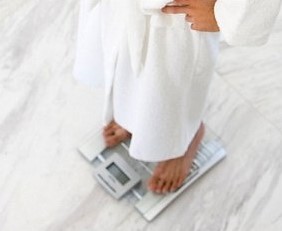 Another arm, this one perpendicular to the weigh bar, lay atop my head.

So I raised my chin as high as I dared, and stretched my torso skyward, straining for every fraction of height.  I’m sure I heard my spine decompressing…ouch!

I sucked my stomach in when she wrapped a tape around my waist, and held my breath as the gown crinkled against me.  I swear she took her time to read it, waiting to see if I’d have to let go.  Mercifully, she released me before I expired.

All my efforts were to no avail, however.  The results spoke for themselves.  Well, actually, I had to ask for them.

“Okay, step down,” the nurse said.  “Sit up on the bed, the doctor will be in shortly.”

“What was I?” I asked, clambering up as directed, pressing the gown between my legs to keep from exposing my nether regions.  As if the nurse cared.  At my age, I’m not even sure why I did.

“Weight, seventy-nine kilos,” she said, placing the clipboard with my chart on a small table by the bed.  “Height, a hundred and seventy-three point seven centimetres.  Waist, ninety-one point four centimetres.”

“What’s that in pounds and inches?” I asked to her departing back.

The doctor didn’t know, either, although she was much more forthcoming than the nurse.  “You’re a little above weight for your age,” she said, “and a tad too short for your weight.  But it’s the BMI we’re concerned with.”

“Body-Mass Index.  It’s a measure of body fat, based on weight and height.  Ideally, you should fall somewhere between eighteen and twenty-five.”  She was busy typing who-knows-what into the computer on the table, its screen angled away from me.

“Let’s see,” she said.  “Hmm, slightly overweight.  Twenty-six point eight.  Nothing to worry about, but it would be good to get it inside the normal range.”

“I’m not fat!” I protested.  “I still wear the pants I wore ten years ago.  Thirty-four-inch waist.”

She looked at me—not unkindly, but quizzically—perhaps wondering why anyone would still be wearing clothes from a decade ago.  “You can’t go by the sizes on your clothing,” she said.  “The manufacturers fudge the numbers somewhat, likely to make us all feel better.”

“Really?” I said.  That was news to me, discouraging news, until I realized that, no matter the number, my old pants still fit.  “Okay, but they’re the same size they were…well, whenever I bought them.  I can still get into them.”  Even I could hear the tinge of desperation in my voice.

“I’m sure they do,” she said gently.  “But perhaps your BMI was high back then, too.  Or maybe you were taller.”

“Taller?” I repeated.  “You mean I could be shrinking?”

“I wouldn’t be surprised,” she said, rising from her chair.  “Gravity always wins, so most people shrink as they get older.”

I must have looked alright, even for an old guy, because twenty minutes later she let me go.  Dressed again in my familiar, old clothes, the crinkly paper gown gladly discarded.  As soon as I got home, I headed for the computer to do the conversions—kilograms to pounds, centimetres to inches.  I figured the metric units were bigger than the imperial ones—as in one metre is longer than one yard—so my real numbers would probably be smaller.  I was surprised by the results.

“A hundred and seventy-six pounds!” I said to my wife, disbelievingly.  “Five feet, eight inches!  Thirty-six-inch waist!  This is crazy!  I’m taller than that!  Their scales must be off.”

“I’m not worried,” I said, convincing neither of us.  “But these numbers can’t be right.  She told me I was overweight, for crying out loud.  My BMI.”

“What was the number?”  My wife obviously knew what BMI meant.

“Umm, twenty-six point eight,” I said, referring to the scribbles I’d made on the back of my appointment card.  “I’m going to calculate it with the imperial numbers, see if it’s lower.”

It wasn’t, though.  I was overweight metrically and imperially, it seemed.

In the Book of Daniel, chapter 5, there’s a passage depicting a judgement visited upon King Belshazzar, where a spectral hand wrote words of condemnation on a wall.  Those words have been translated as:  You are weighed in the balance and are found wanting.

I tried to imagine how the poor old king must have felt when he saw the handwriting on the wall, but our situations were quite different.  It had to have been worse for him.  He lost his kingdom, after all, and his life.

All I have to lose is some weight.