Apparently, there are more than 190 words in the English language ending with the suffix -ocracy.  We are perhaps most familiar with this one—

We congratulate ourselves that we live in a country governed in such a fashion, seldom stopping to ponder just how precious and fragile the notion of democracy is.  But unless we, as a people, are diligent and responsive, the freedoms and liberties we prize could very well be snatched from us.

Do you doubt that?  Would you like some measure of proof?  Well, take a look at the following list of -ocracy words, each of which defines a sort of government different from that which we enjoy.

The words are arranged alphabetically, each followed by a mismatched definition.  Can you pair up the words with their correct meanings?

[the answers are provided at the end of this post]

a) government under the control of a state-sponsored religion

c) government or state in which the wealthy class rules

d) government ruled by a thief or thieves

e) government by many bureaus, administrators, and petty officials

f) government or power of an absolute monarch

g) government hierarchy in which the unexceptional prevails

i) government ruled by an elite or privileged upper class

The democracy we enjoy in Canada is a parliamentary system cadged mainly from the British structure, divided into three main branches:  executive, legislative, and judicial.  The first consists of the government (Governor-General, Prime Minister, and Cabinet); the second encompasses the House of Commons and Senate; the third is a series of independent courts, at the top of which is the Supreme Court of Canada.

Our government is a constitutional monarchy, at the head of which is the Queen (or King), who is represented in Canada by the Governor-General.  Each provincial or territorial government is a close replica of this same structure.

By contrast, the system of government in the U.S.A., our great neighbour to the south, is a constitutional republic—not a monarchy.  But it, too, features an executive branch (the President), a legislative branch (the Congress, comprising the House of Representatives and the Senate), and a judicial branch composed of a series of courts, at the top of which is the Supreme Court of the United States.  Each state government is a close replica of this same structure.

Both governments are democracies, or purport to be, which conform to the aforementioned definition: the supreme power is vested in the people and exercised directly by them, or by their elected agents, under a free electoral system.

It is interesting, though, during such turbulent times, to examine the operation of these two governments—how they exercise their power, how they execute their duties, how they are held accountable to the people.

The great accountability comes, of course, during elections when we, the people, have the right to cast our secret ballots to determine who shall assume the reins of government.  The unfettered right to vote is the cornerstone of any democratic society. 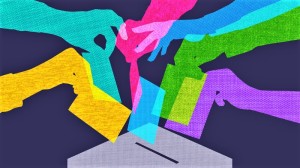 Yet, how many of us take it seriously?  How many of us actually exercise that right, a right earned and protected over numerous generations, often at great sacrifice.

In the most recent federal election in our country, only two-thirds of eligible voters turned out to vote, and that was considered a strong showing.  Alas!

In the most recent presidential election in the U.S.A., just slightly more than half of registered voters actually bothered to cast their ballots, the lowest turnout in twenty years.  Egad!

As we examine these two experiments in democratic government, Canada and the U.S.A., it would behoove us to look again at the list of other –ocracies cited above, and their definitions, and reflect on whether some of them may be affecting the governance of our two nations.  Are we still, truly, democracies?  Or are those other -ocracies creeping inexorably in?

If we decide to ignore such incursions, we do so at our peril.  As John Adams, the second American president, wrote: Remember, democracy never lasts long.  It soon wastes, exhausts, and murders itself.  There never was a democracy yet that did not commit suicide.

That would be crazy!  But I suppose we shall see.