It’s the most wonderful time of the year…

From as far back as I can remember, the Christmas season has always been my favourite.  And it’s true even more now, in my mid-seventies, than it was as a child.

When I stop to think about the reasons for that, I suppose it has to do with the different meanings that Christmas has for me.  Although I can think of many, there are three significant beliefs that stick out.

…with the kids jingle-belling, and everyone telling you, “Be of good cheer…”

None of the three has anything to do with the endless sparring between the commercial and religious aspects of the season—where we find Santa Claus in every shopping mall, serenaded by traditional carols blasted over a tinny sound system.  Or coming to town on a huge sleigh pulled by plastic reindeer.  Were I to dwell on that, the whole season would be spoiled. 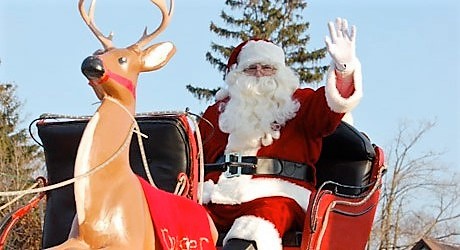 Neither are my feelings affected by the view of Christmas as a pagan festival, the embodiment of which is old St. Nick, rather than as a true celebration of the birth of Christ.  For me, the two concepts are not mutually exclusive.

It’s the hap-happiest season of all…

As a matter of fact, Santa Claus is one of the things I like best about Christmas.  For the record, I still believe in him.  Every Christmas—under the somewhat curious stare of my grandchildren, who are all sophisticated now to the point of pretending to pretend—I hang up my stocking, just as I have for more than seventy years.

“Gramps, you don’t still believe in Santa, do you?” my youngest granddaughter asks.  She watches me closely as I frame a reply.

“Sure do,” I say.  “I mean, I don’t know if there really is a Santa Claus, but it’s more fun to act as if there is.  Believing in Santa is one of the things that make Christmas so much fun.”

I don’t know if she agrees with me, but it’s reassuring to note that she still hangs up her own stocking.

The second thing of significance for me about the Christmas season is the good feeling prompted by memories of Christmases past.  It’s always been a time for family members to come together.

With those holiday greetings and gay, happy meetings when friends come to call…

For years, my parents’ house was the destination on Christmas Day, eventually giving way to my home, where my wife and I raised our two daughters.  Grandparents, uncles and aunts, cousins, and friends would all drop in, often staying for the opening of the gifts, and dinner afterwards.  And, without fail, they would reminisce about their own childhood Christmas seasons, sharing their happy, nostalgic memories with us.

…tales of the glories of Christmases long, long ago…

It’s different today, of course, because our daughters have children of their own.  Theirs are the homes we gather at now, with in-laws and friends of their generation.  And, to my everlasting surprise, we have become the old folks—observers rather than directors of the goings-on around the tree.

Worst of all—as the oldest one gathered there, I have to wait ‘til the very end to open my stocking.

…parties for hosting, marshmallows for toasting, and caroling out in the snow…

But, regardless of where we are, the things that haven’t changed are the feelings of love and joy we all share at this time of year.

The third thing of importance to me is the fact that Christmas does mark the birth of Christ.  I believe the question of historical accuracy is irrelevant.  The very fact of his birth, whatever the actual date, is a symbol of our hope for peace on earth.  It stands as a beacon of the promise for salvation in a world fraught with danger and despair for many.

I have absolutely no difficulty in integrating these three different notions of Christmas.  For me, they come together nicely—the fun and excitement of Santa Claus, the love and laughter of times with family, and our renewing joy at the birth of Christ.

Perhaps the thread that ties the three together is the idea of faith, the idea of choosing to believe.  Christmas is my favourite time of the year, but for reasons that are neither irrefutable nor provable.  Faith doesn’t abide proof.

My beliefs are valid only because I deem them so.  I want to believe in them, so I do.  And, therefore, Christmas represents a magical time for me—especially now, knowing I have more of them behind me than ahead.

Softly-falling snow, gaily-twinkling lights, the wonderful music, the excited laughter of grandchildren, and a peace that surpasses all understanding—all join to herald the coming of another Christmastime, a time to celebrate, to remember, to rejoice and give thanks.

It’s the most wonderful time of the year…

And it matters to me!

8 thoughts on “It Matters to Me”