For most of my growing-up years, I wanted a nickname so badly it hurt.  But it never came to pass.  Not once did I ever have a proper sobriquet bestowed on me.

As one who spent a whole lot of time playing team sports, I knew countless other boys by their nicknames—Dingo, Big-Guy, Scoop, Madge (short for Magic-Man), and, rather unkindly, Lard.  When I think of them now, I can’t even remember their real names.  Nor do I picture them as the old men they surely must be; rather, I see them as they were back then—immortals, in a way.

But I was not fated to be one of those ‘also known as’ guys.  My coaches forever called me by my surname or my jersey number.

Twelve!  You’re on deck!  Get out there!

If you are of my era, a Canadian childhood spanning the 40’s, 50’s and into the 60’s, and if you were a sports fan, you will know that our greatest heroes all had nicknames.

In basketball—the Stilt, the Big O, the Cooz, The Mailman, Pistol Pete.  In baseball—Teddy Ballgame, Joltin’ Joe, the Barber, Stan the Man, the Mick.

In hockey, my favourite of games—Mr. Zero, the Rocket, Boom-Boom, the Big M, the Roadrunner, Cujo, the Dominator, Number 4.

[*The real names of these athletes are shown at the end of this post.]

But I never had a nickname.

At one point—desperate for a nom de guerre I could call my own, and because I was a year younger than my compadres in school and sport—I began to call myself The Kid.  I think I became a legend in my own mind.  In conversation with friends, I would say, The Kid did this…or The Kid did that…

To my chagrin, the nickname never caught on.  Nor did the practice of referring to myself in the third person, although it did garner me a lot of strange looks.

There were times during these years that I suffered the experience of being called a variety of names by others not favourably disposed towards me—loser, dork, pencil-neck, to name a few, plus some even less polite.  But those were not nicknames; proper nicknames had to be given in recognition of one’s accomplishments, talents, or character.

Sticks and stones…I would mutter quietly.  The Kid is above all that!

The closest I ever came to acquiring a nickname was at the end of my playing days, striving mightily to keep up with skaters twenty years younger than I in old-timers’ hockey.  But it wasn’t my teammates who conferred it; it was my opponents, muscling me unceremoniously along the boards. 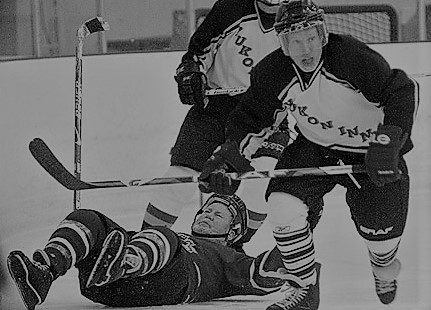 Not exactly what I’d always aspired to be known as.

So, as you might expect, it has come as something of a relief to me that now, at this ripe old age, I have finally acquired a nickname I can be proud of.  Mind you, I bestowed it myself, to designate me as a ‘teller of tales tall and true’.